Quite despite myself, I've found myself involved in a new fandom, the Wraeththu series by Storm Constantine. Wraeththu are a hermaphroditic race that pop up and by incepting others, take over the world in a somewhat post-apolocalyptic earth. They're sensual, androgynous, compelling, fey, bold, and fabulous fodder for a fanfic writer like me! Information about Wraeththu can be found a few places:
‡here at Wikipedia
‡here at Storm Constantine's blog
‡here there be gorgeous pictures from a German-created photo book
‡here is fanfiction

Feedback is better than chocolate LOVE. Make my day and email me if you're enjoying these Wraeththu stories: thevina33 [at] gmail [dot] com. It's adult, though Wraeththu physiology has its own vocabulary, and I see it as slash even though they're hemaphrodites. To me they seem like two masculine entities, so I'm considering it slash. 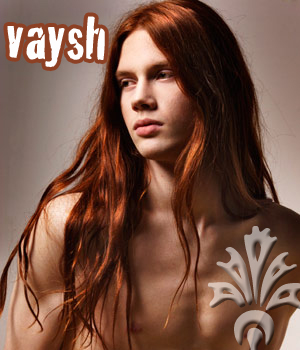 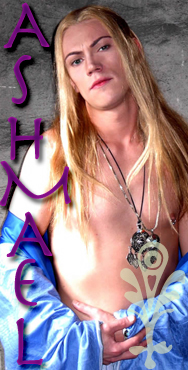 A Calanthe By Any Other Name (is still Cal)

I wrote this as a gift to the dear Heartofoshun as a thanks for her exceedingly helpful copy edit and evaluation of Maelstrom and Mage before I sent it to Storm for further edits. She asked for a story that dealt with how differently Swift and Seel perceive Cal and how very different their relations with him are. Set at the end of The Shades of Time and Memory at Imbrilim, after Swift and Seel have seen Cal and discovered that he rescued Aleeme and Azriel from Ponclast.
Summary: Cal may be an enigma, but he always arouses strong reactions in the hara closest to him. In seeking his rescued son, Swift finds new patience to deal with his chesnari's bitterness toward the har who has profoundly shaped them both.
Written July, 2009

I actually wrote this at the end of May and forgot to post it at my own website until August. :facepalm: A short vignette written for a friend who requested, of all pairings, Cobweb/Lianvis.
Summary: Potentially set canonically at some point not quite a decade post-Bewitchments, Lianvis visits Forever (in search of Ulaume) and spends some memorable time with Cobweb.
Written May, 2009

A friend requested a story about Seel, and I was drawn to write more about the time period in Wraiths when Seel and Ashmael are together. This rather PWP also brings in one of my favorite OCs, Parallax, who figures prominently in Maelstrom & Mage.
Summary: At the end of chapter 12 after Seel saw Pellaz in his re-generation tank, Thiede is very specific with Seel and after telling him he's going to move to Immanion within a month, says, "You will be pleased to know I've allocated a sedu to you. Your training in controlling it begins in two days' time. I'll send a teacher to Saltrock with the animal." Seel isn't particularly grateful.
Written May, 2009

Summary: Cal murders Orien Farnell in cold blood after taking aruna with him. This is canon. What might have been going on in his head before, during and then immediately after this act? This story is one possibility.

Author's Notes: Written for the songfic challenge at Raythoo at LiveJournal. The song that inspired this story, the song that Cal sings and is also the source of the title of the story, is "All Along the Watchtower," penned by Bob Dylan. I must admit that it's Bear McCreary's version from the Battlestar Galactica season 3 soundtrack that I've had on repeat. Thanks to my astute beta Elfscribe, and to Persephone for being an advance reader and sharing her thoughts.
Written March 17, 2009; posted March 19th, 2009

Summary: There are many casualties in the second assault on Ponclast that happens in The Shades of Time and Memory. This is a possible telling of Aleeme and Azriel's story after their liberation from Fulminir.

Author's Notes: Firstly, my huge thanks to my two betas, Elfscribe and Wendy. They both helped tremendously in making this story as polished as it is— and thanks for pushing me to write Cal! Hopefully there aren't any mistakes, but if any remain, they're mine. My gratitude also to Persephone for being an advance reader and for sharing her enthusiasm and thoughts. One of my original characters makes reference to a Chickasaw legend; I found the story here initially.
Written January, 2009; posted February 3rd, 2009

Libertine
There was another challenge over at Raythoo at LiveJournal, "Terzian As Never Before," writing about Terzian in a soume role.
Summary: Terzian readies himself for the hunt. Author's Notes: This is just a tiny ficlette exploring the idea of Terzian seeing himself in his more soume role, given a fair amount of sheh before he goes to seduce Cal in Enchantments. A few pages before this scene, Cal somewhat disgustedly tells Pell: "All those female bits lurking inside you, where you can't see them, where you can forget them: but they're there!" When Terzian appears at that fateful dinner, Pell notes he's been drinking and that's chilling because it means he's no longer in control of himself. I interpreted that to mean Terzian accidentally lets his more soume parts loose— something which also might well strike fear in Pellaz, or anyhar else for that matter!
posted December 24, 2008

This story focuses on the earliest years of early Sulh Wraeththu. Alba Sulh is essentially Scotland and England, and Keltoi, Ireland. Features all original characters with the exception of Cobweb, the only Sulh we meet in the first Wraeththu trilogy. Told from the POV of Kelp, who comes from the human land of the Outer Hebrides
Summary: Níl gach uile fhánaí caillte— Not all who wander are lost. (J.R.R. Tolkien) Kelp, a newly-incepted har and his companion, Blackspur, journey from an outer island of Alba Sulh to find others of their kind. Adult. Adventures, aruna, and a warning for occasional violence.
Final post December 5th

After the Storm, Restless Fire
I was working on a collaboration with a fellow Wraeththu fan, an artist, but due to miscommunication, I ended up posting this on LJ before she had a chance to do the artwork. So, here's an Ithiel-centric story to do with his alliances both with Cobweb and Terzian, set two days after Terzian lets Pellaz and Cal leave Forever and then retreats into his room to mourn for three days.
Summary: Ithiel is rather an enigmatic har in Bewitchments; one of the things obvious about him is his loyalty both to Terzian and Cobweb, though doubtless they manifested themselves differently. This is a mostly PWP exploring Ithiel's relationship with the two adult monarchs of Forever in the immediate aftermath of Cal and Pel's departure.
Pairings: Ithiel/Cobweb, Ithiel/Terzian
Rating: Adult
posted October 22nd, 2008

Swooping to Landward
My beloved Rainwish has been an anchor for me this spring and summer, so I offered to write a story for her. She said she'd be interested in a story about a Colurastes and Froian, certainly not excatly a common pairing within Wraeththu at all. My immense thanks to Elfscribe for her very astute beta.
Summary: Opposites attract because they are not really opposites, but complementaries. (Sydney J. Harris) When a trio of Colurastes spend a few days in Orense, one particular Froia finds his life forever changed. Adult; an alert for double penetration, Wraeththu-style.
posted August 2nd

Drabbles!!
Wraeththu Drabbles
I've written a few drabbles of late; don't know how many I'll end up with, but figured I'd go ahead and post them here. If you're actually reading my Wraeththu stories here and would like to request a drabble, in all seriousness, email me and let me know! My email address is at the top of this page.

Quare clausum fregit: Wherefore he broke the close
The dear heartofoshun suggested that I write a 'missing scene' or something set within Down the Whispering Well. This is a short, PWP vignette of hope for Vaysh, set two years after the Epilogue of DtWW. The evening that Yadzyar leaves Immanion after a six-month stay to apprentice being a healer, he and Vaysh have a conversation which unexpectedly turns into much more.
posted June 8th

Mere Trifles
Written for the inaugural monthly challenge at Forever Wraeththu, the June 2008 Challenge — Seel, Swift and Thiede. This short fic addresses the fact that Seel was so against forced blood-bindings, and yet from Swift's point of view, there's no indication that he put up a huge fight. This vignette addresses a conversation that might have happened between Swift and his hostling Cowbeb before the plans are set in stone.
posted June 4th

Interpret Me the Savage Whirr
I'm not entirely sure where this story came from. I spent months writing a Vaysh/Ashmael gapfiller, and then as I was doing more research in The Wraiths of Will and Pleasure, I discovered that Ashmael and Seel had a relationship, of sorts. So I explored that, from Seel's POV. This does gratuitously reference my interpretation of Ashmael, and includes some key elements from "Maelstrom and Mage" for color. There are also two directly quoted sentences from 'Wraiths' for grounding, and also extensive rereads of Bewitchments. Primarily, however, it was this paragraph of Storm's that drew me in and ignited my pen:

Colt and Stringer saw Seel's new relationship with Ashmael as a positive healing thing. They were not aware of the darker undercurrents and Seel didn't enlighten them. Ashmael took to visiting Saltrock fairly regularly. Seel always looked forward to these visits, but somehow they didn't seem real. In bed, Ashmael taught him things he'd never dreamed possible, all the while respecting Seel's pride and pretending Seel already knew of them. Seel felt as if he were being groomed for something. Taking aruna with Ashmael was like being trained to explode the world. He could feel immense power simmering around him and yet he could not dispel the suspicion, however slight, that Thiede's hand was behind it. He was under no illusion that this relationship was permanent.

Passion's Acolyte
My dear friend Mona recently read Wraeththu and asked for a short Cal/Swft story. Here 'tis. PWP, rooning. Cal helps Swift explore new sides to himself in the first few weeks after Swift's Feybraiha. Inspired by these three sentences from The Bewitchments of Love and Hate:

Sometimes, Cal would come to my room at night. Sometimes we would only sleep together, needing company, but other times, we would scream and struggle and tear at each other until the dawn. He was voracious and the merest touch of him kindled my responsive frenzy.Posted April 19th

Down the Whispering Well
Sequel to "Maelstrom and Mage"
Being brought back from the dead doesn't mean happily ever after, especially if you're Vaysh. Life has its costs, and he pays dearly. An exploration of Vaysh's character in the years before and through Pellaz's transformation, and the burdens he endures, because he must.
begun March, 2008, final post May 4th

Maelstrom and Mage, Desire Thine Darkling
Genesis. Paradise. Illumination. Exodus. Before they went to Immanion, before Thiede manipulated their destiny, before death and despair, Ashmael and Vaysh knew and loved each other. This is one way their story may have been told.
begun January, 2008, completed March 8
Now available here as a pdf for your reading pleasure.

Now has pictures of 'Castlegar', their mountaintop sanctuary. It happens to be my alma mater. They do say to write what you know, so… There's a link to a few pictures here.

I've also made two soundtracks, one to go along with each novella! Art below shows the playlists; let me know if you'd like a copy burned or a link to the Megaupload zip files. 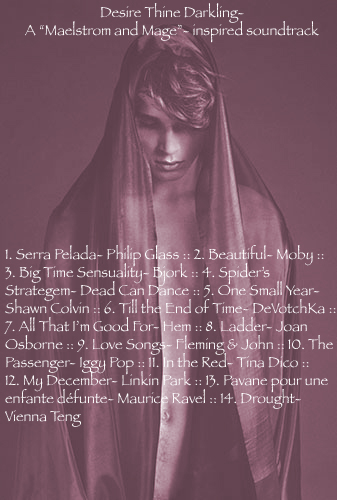 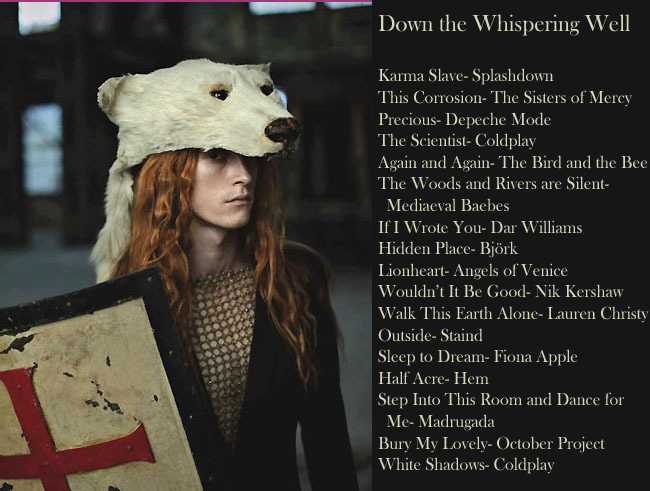